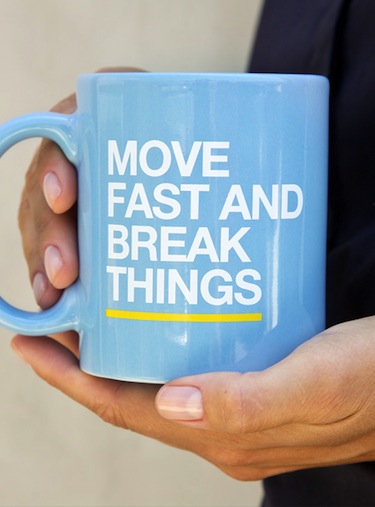 In improvisation we encourage participants to "fail proudly". Equivalently, we might use phrases like "make mistakes", "fail often" or "embrace failure" to refer to this approach.

Using words like 'fail' and 'mistake' can be confusing (and sometimes genuinely off-putting) - particularly in business, where we are driven to 'succeed'.

Improvisers recognise, however, that making mistakes is an essential part of the route to success.

The Language Of Failure

The word 'failure' is saturated with negative connotations. A lot of this negativity comes from a fundamental misunderstanding that while a person's endeavours may fail, to call them a failure personally is simply unhelpful.

When used mechanically / analytically, the concept of failure is perfectly legitimate and need not be feared. Put simply, it's fine to say that an experiment failed and taught you something. It is in this spirit that improvisers think about failure.

When one person makes a mistake, it invariably leads to opportunities for the whole team. As the whole team embraces the mistake, treating it as an offer, innovation starts to occur.

This happens often in improvisation particularly when a word is mis-heard, a term mis-used or an action mis-interpreted. Playfulness turns failure into discovery.

In 1966, psychologist Elliot Aronson explored a theory linking how likeable we find a person with how fallable we perceive them to be.

In his test, he asked participants to listen to recordings of people answering a quiz. Select recordings included the sound of the person knocking over a cup of coffee. When participants were asked to rate the quizzers on likability, the coffee-spill group came out substantially on top.

The result was so striking that Aronson coined the term 'The Pratfall Effect' to describe it.

His conclusion was that those who never make mistakes are perceived as less likeable than those who commit the occasional faux-pas. Messing-up draws people closer to you, makes you more human. The perception of perfection creates distance and an unattractive air of invincibility.

This provides us with a second reason to fail proudly and openly. Covering up failure not only robs us and our team of our ability to learn from a mistake but, if the cover-up is 'successful', can foster an air of perfection that actively drives people away.

Other than being a few of my favourite things, what do these items have in common...?

The answer is that they were all 'happy accidents'. The inventors of all these innovations regarded their 'mistakes' as opportunities.

So too, in the world of technology where "fail early" is an oft-cited mantra. Test driven development, continuous integration and rapid iteration are all mechanisms that allow small development efforts to fail in ways that provide useful feedback quickly. Indeed, Facebook CEO, Mark Zuckerberg is often quoted as saying "move fast, break things".

The faster we get at learning from unforeseen circumstances and outcomes, the faster we can turn a 'mistake' into an opportunity to innovate. In organisations that marry mistakes with shame or embarrassment, (or, worse still, punishment), people become timid and overly-cautious; nobody takes risks. To be successful in the long-term, companies need their people to feel free to try new things, take risks, experiment and innovate.

The only thing that people can truly fail at is not learning from the mistakes they make.

Check out this follow-up discussion for more.